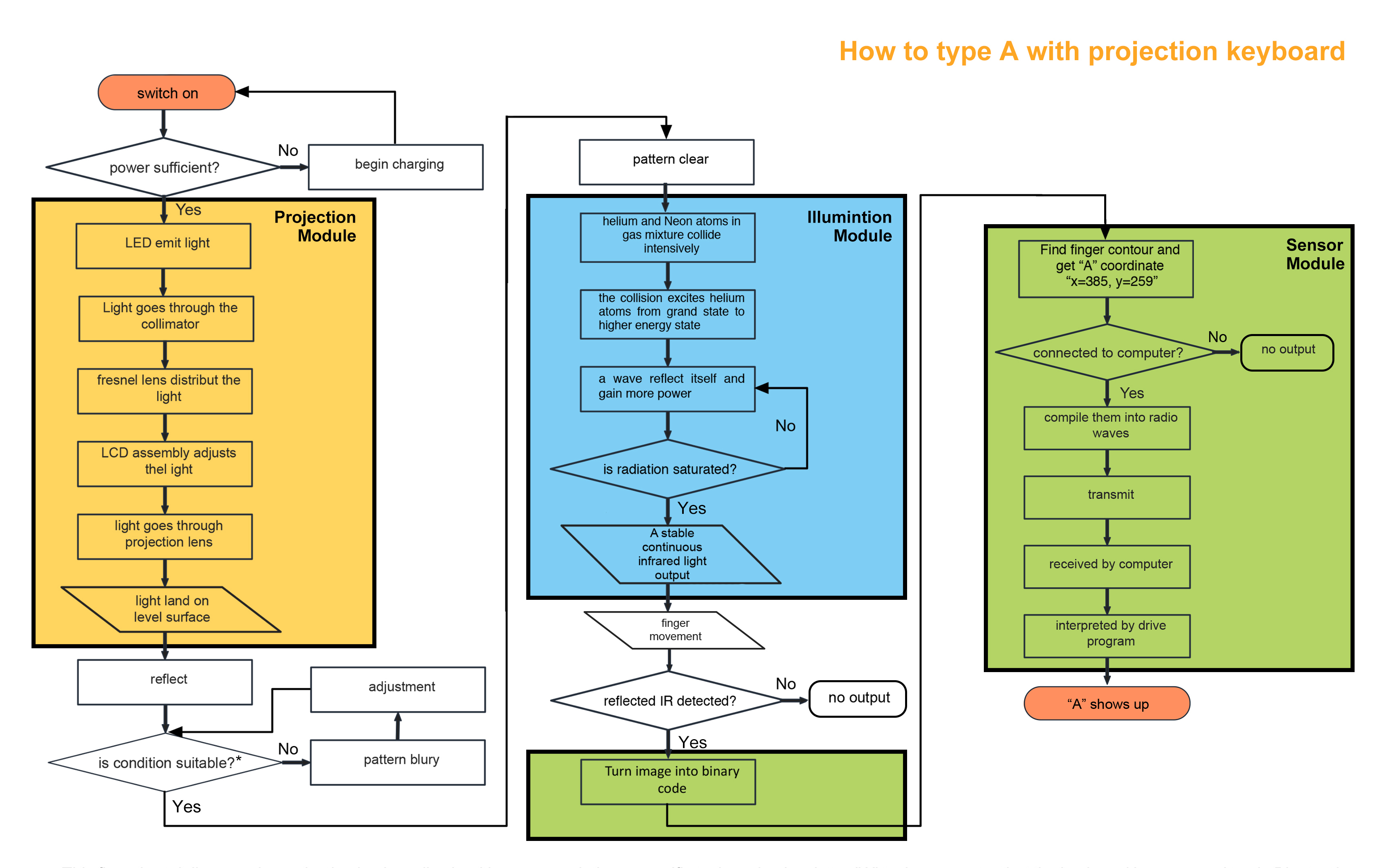 This flowchart delineates the projection keyboard’s algorithm for completing a specific task: typing in a letter “A” to the computer that the keyboard is connected to via Bluetooth.

In general, the process starts from the power supply submodule of connectivity module, and then goes through projection module and illumination module, producing visible keyboard pattern and invisible IR light plane. The effect of these two components is checked by the conditions of the working environment.

First, the light of the keyboard emitted by LED module and then the Fresnel lens distributes the light in order to concentrate more light on the smaller segments. Then, LCD assembly is oblique to adjust and focus the light. An F/2 projection lens generates the image of the keyboard. The input of this module is the electric power and the output of this module is the image of the light. The whole process does not involve the process of detection.

Then, infrared ray (IR) laser emits invisible infrared light, which can be interrupted by human’s fingers and then is detected by the sensor. Among all kinds of infrared ray laser, Helium-Neon IR laser is one of the most popular lasers to be applied to industry. When electricity plugs in, the helium-neon gas mixture, which is inside a glass tube begins to be activated. He-Ne collision stimulates helium atoms to high-energy excited states and generates waves to reflect repeatedly in the tube till the radiation gets saturated. Eventually, a stable continuous infrared ray laser is emitted.

After the finger interrupted the IR light plane, the sensor module captures its location and figure out the letter that user intends to type by mapping the location to keyboard pattern. The sensor module of the projection keyboard contains an algorithm that can turn the image captured by the camera as input, to the actual letter on the screen as output. While typing on the projection keyboard, human fingers hit the infrared plane to create a keystroke. It goes through an infrared-pass filter and becomes binary code. The code creates a coordinate, which is then mapped to the keyboard and the specific letter is found and typed out. For example, finger hitting on the projection keyboard will be captured by the camera and create the coordinate “x=385, y=259”. Mapping to the keyboard, and through the computation of the program, the coordinate will yield letter “A” as output.

Finally, the binary codes of the letter “A” are then compiled into radio waves and sent to the computer through Bluetooth. Then, letter “A” shows up on the screen of the computer.