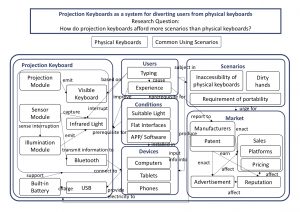 A projection keyboard is an innovative technology product that enables users to type on any interfaces at any time without limits of physical keyboards. In other words, it affords more scenarios than a physical keyboard to a large extent. Here come our research questions. How does a projection keyboard realize it? Is it evolutionary to the relationship between physical equipment and its functions? How do we understand the technology under the background of human-computer interaction?

For the technical side, a projection keyboard mainly consists of 4 modules, a projection module, a sensor module, an illumination module, and connectivity module. The projection module emits visible lights to form a visible QWERTY keyboard for users to refer to. Users’ typing is based on the visible keyboard that projection module sends out. Meanwhile, the illumination module emits invisible infrared ray covering the surface of visible QWERTY keyboard. Whenever typing interrupts continuous infrared light, the sensor module captures it and records its location and meaning and transmits information to devices, such as computers, tablets, and cell phones through Bluetooth, the connectivity module. Apart from these, the built-in battery of the projection keyboard, which is charged by devices via USB connection supports the running of it. Also, other conditions need to be fulfilled to type smoothly, to name a few, suitable light to realize visible keyboard, flat interfaces to operate smoothly, and APP or software related to typing preinstalled in devices.

When it comes to the social side, there are a few limitations for individuals to utilize physical keyboards in various scenarios, such as inaccessibility, dirty hands, or high requirement of portability. On the basis of these demands, the market gives birth to a projection keyboard. Manufacturers develop their own patents on this product, mass-produce it, and enact a series of advertisements on various media to promote it. With persuasive and attractive advertisements, manufacturers can gain a good reputation, and sales volume gets improved as well. The strategies of sales can be extremely broad, but online and offline stores and pricing strategy are the two most significant elements in this case. Besides that, the user experience can be a bridge connecting the technical product, users, and manufacturers together. Users report their feedback directly or indirectly to manufacturers, such as leaving comments or participating in questionnaire surveys, on the foundation of which, the manufacturers enhance the quality of products, to name a couple, increasing typing accuracy or customizing typing preferences.

2. Difference Compared with the System Before

Before the emergence of projection keyboards, it is universal to utilize physical keyboards. Although projection keyboards still do not play the leading role in keyboards’ market even till now, it still represents a new insight of information’s input. Compared with these two types of keyboards, there are mainly two differences worthwhile to emphasize.

3. Forces Trying to Change the System